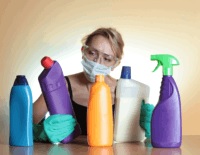 Do you believe a low or no VOC Synthetic product is healthier for you than a natural product with a relatively high VOC figure?

The issue is the type of VOC not how much VOC.

This information is aimed to provide food for thought when selecting products based on their VOC (Volatile Organic Compounds) information and why other important issues must also be considered when choosing paints and finishes.

There are several categorises of VOCs, such as Very VOC, Semi- VOC, and Microbial VOC. These are defined by their solvents boiling point, not smell or toxicity. Just because there is no smell, does not mean that there are no harmful VOCs. To evaluate the possibility of harm, one must know exactly which ingredients are contained in a product.

Governments are now regulating against these unstable chemicals as they let off gasses that are very harmful to people and the environment however "Total VOCs are only useful as an indicative value and results should be critically scrutinized" commented the German Institute for Building Technology.

Not all VOCs are the same. There is a large amount of research and scientific evidence to support the idea that there is a significant distinction, in terms of health impacts, between naturally occurring VOC's such as orange oil, and synthetic VOC's.

While indoor pollutants known as VOC's evaporate rather quickly, the semi-VOCs persist in the interior and are emitted only very slowly. These semi VOCs may also be taken up via skin contact, contaminated food or house dust.

The inconsistency in VOC's testing and reporting is used detrimentally when labeling products, such as water-based paints  and  varnishes, as VOC-free or low-VOC (or solvent-free / low-solvent), even though they can contain SVOCs in high quantities which could immensely effect occupants quality of living.

One would think that relying solely on a numerical value should allow for easy comparison between products however in practise it is not so simple. The existence of “exempt” compounds and variable amounts of water (a solvent) in coatings may result in a significant difference between “actual VOC” and “regulatory VOC”. There is no relevance or logic in knowing just the contents of a paint or sealer; it has to be applied in order for it to be useful.  Furthermore, there is no consideration made between the origin of the VOC, its affect on the indoor air and coverage of the various products.

Supporting documents such as the MSDS (Material Safety Data Sheets) are legally only required to list hazardous chemicals that individually make up more than 1% of the volume of the entire formula (unlike European guidelines). A paint company can put in several chemical masking agents and biocides, and not have to list any of them because individually they are less than 1% of the volume, combined though can make up a large volume of the actual product.

If you really want to use a paint that is truly healthier for you, then look into products that have been used successfully by the chemically sensitive. It is not sufficient for manufacturers to simply state their ingredient list is a trade secret. Without accurate information, especially a full declaration, it is nearly impossible to know how each component within a product will react with each other, let alone how it reacts to humans and the environment.

In addition, one would expect to have less health issues with substances found in nature then synthetic chemicals that are manmade. It is also worth noting, that disposal of products manufactured from natural raw materials create or have less impact on the environment when reused or disposed of.

Many oils and paints produced with water (water based) as the solvent require a multitude of auxiliary substances and preservatives in order to be stable.  As oil and water do not mix, one needs strong emulsifiers to blend these substances together.

Some natural solvents can be highly aggressive however whilst Isoaliphates are petroleum based, they are highly purified and are a better alternative. They are recognized as one of the most harmless solvents known to man and are widely used in the medical, food and cosmetic industries.

Another factor to consider is the coverage rates of natural products, especially the penetrating oils, these are extremely economical.  If one has a Low VOC product with a small coverage rate and a comparison is made with a higher VOC product but this covers a larger area, in total the actual VOC per square metre of the higher VOC product can work out to emit significantly less.

For us mere mortals and where our health is of concern, the level of VOC in a container is not of much bearing. It is the toxicity of the ingredients that is important as these are the ones that affect the IAQ (Indoor Air Quality).

As mentioned “Free of VOCs” does not mean that products are completely safe for humans, animals or the environment. Even small quantities of solvents can be highly toxic, today many of these are masked to pass requirements only to reappear as hazardous ongoing semi VOCs, (resulting in persistent off gassing) which are not assessed. Whereas natural products with a preliminary high VOC classification usually contain no masking agents and no semi VOCs and once dry, do not off gas. Toxicity and VOC are not automatically related. Oranges are not regulated, yet orange oil is a VOC. Low VOC does not inevitably mean a lower toxicity than a high VOC product or vice versa. Toxicity depends on the type of solvent, the percentage of the solvent in the wet product and how it influences the indoor air that we breathe...and not simply a number on a tin.

So now when you are asked, do you believe a low or no VOC Synthetic product is healthier for you than e.g. a natural product with relatively high VOC?

The answer is a simple No.

A cheeky take on a children's story, but one that adds some perspective to the issue.

A Volatile Organic Compound, is like an orange, in fact Orange Oil which is in the peel of an orange is a VOC, a natural one.

A little girl named Mary has one can of paint, with 435 oranges in it. A fairy gave her a special elixir which allowed her to dissolve 435 oranges into thin liquid oil that smells really nice.  Mary can paint 240 squares with her thin oil using 435 oranges.
Now Andrew is also a little boy with a can of paint, although his only has 140 oranges.  An evil goblin called the Epoxyman, chopped up Andrew’s oranges quite roughly, and mixed them with a sticky, thick stinky honey called Epoxy which makes children very sick.  Now because Andrew's can is so thick he can only paint 6 and a half squares with his one can.
How many cans and oranges does Andrew need to cover the same 240 squares that Mary’s paint covered?

ANSWER:  37 cans and an amazing 5,180 oranges.  So the Fairy was very clever and made the oranges go much further, and the stinky epoxyman goblin honey used much more oranges wasting them and also making kids sick.