Chance meetings at the Fitzroy Hall 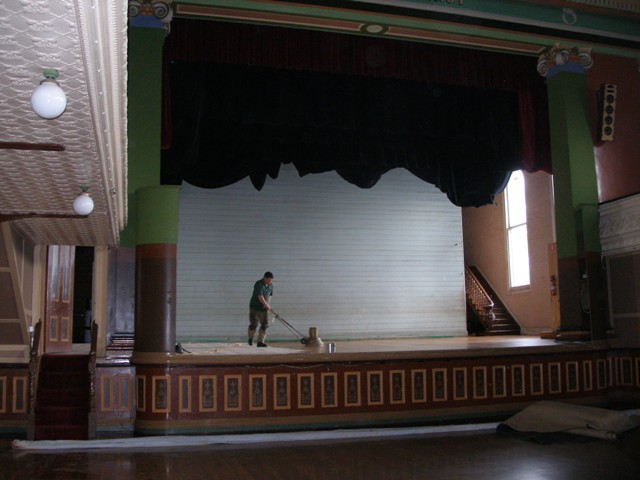 It was at another chance meeting at an expo combined with many long months of campaigning through the various avenues of council hierarchy that we as Anro were contracted to sand and oil the beautiful old hardwood floor at the Fitzroy Town hall ( dating back to 1873 and recorded as “Heritage place" by Heritage Victoria.

This is being now used as a  case study in the cost effectiveness of using the Livos oils on such a surface compared to a synthetic coating that would require re sanding. This is most important especially since these floors, over 100 years old have all been sanded a number times previously, consequently the timber is now wearing thin. The timber floors at time do receive quiet an amount of abuse not only from footwear, however with heavy items dragged all over the suface.

The sanding completely stripped back the heavy varnish that was previously used and exposed the beautiful old boards. Due to the public area, the Koimos no VOC oil was used and this has now not only completely revitalised the stage area of the hall however the floor will not need to be resanded at all. Rejuvenation can take place without sanding and wearing out the boards.

Words by the Executive Project Engineer, City of Yarra.

In early 2011 the City of Yarra was looking for a more environmentally friendly method of treating its historic Town Hall Floors.  It was decided to use Livos Australia to sand and oil the stage floor in the Fitzroy Town Hall as it was in very poor condition. The benefits we found were a minimal impact from smell and disruption compared to traditional synthetic coatings. Also given the floor is used for public functions it is regularly scratched by hirers of the hall.  We found that the floor was quickly and easily repaired without the need to re sand the surface.

I would not hesitate in recommending Livos Australia for other projects.